Worked out that I’ve probably made a mistake for each thing I’ve done right. –Satellite

It’s a lyric from a song about love, which makes it sorta, but not quite fit for Mother’s Day.  As I often do, I found myself inspired to write something while in the shower this morning.  Don’t ask why cleanliness = creativity for me, but I often land upon solutions to my ills amidst the Proactiv and shave gel.  I really should investigate in some sort of technology which allows voice dictation under running water, because by the time I’ve dried off, I’ve often forgotten the brilliant story arcs begun there.  This one isn’t brilliant, but I’m gonna give it a go.

I’ve been a mom for 12 years, seven months and a few odd days now.  I am certain that I’ve screwed up something that matters on each of those days, but I also know I have to be doing something right.  My children are at least average in intellect and achievement, but more importantly, they’re well-behaved, decent children who respect boundaries and treat others with kindness.  Aside from the usual brotherly stupidity, they’re good to each other and understand our family is united in pursuit of happiness through hard work.  Mostly MY hard work and my husband’s, but we’re gettin’ there.

How did I know how to lead them in the direction of such traits?  I had some pretty good examples.  This morning’s shower epiphany came in the form of a flashback.  I’ve been sleeping poorly lately, and my neck and shoulder carriage hurt like a beast–an ugly, gnarled beast at that.  I was thinking how relieved I was to have neither baseball practice nor games today, and to have nothing but celebratory food and Mother’s Day flower-buying at the garden center on the agenda.  Immediately after giving voice (the voice in my head) to that thought, I felt guilty feeling relieved that I had no one to shuttle today. 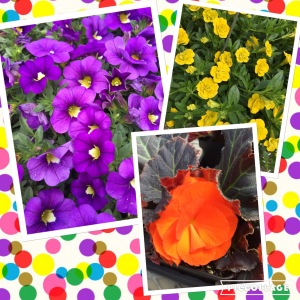 I was the fastest kid in my grade during elementary school.  I never lost a 50- or 100-yard dash, not even once, and I was always the anchor on the sprint relays because I never stayed behind for long.  I was the first chair flute player in our grade school band, never second.  I continued these pursuits in high school, and added volleyball (at which I SUCKED, so that was a one-off) and cheerleading (I was the not cute, not skinny one who could jump and do splits in the air) to my roster.  My younger brother was all baseball all the time, unless it was fall football or winter basketball when those sports dominated our weekly calendars.  For a time, it was also fishing and archery for him.  We grew up in a small town, attended a small-town high school, and had many opportunities there that I likely wouldn’t have had if we lived in a larger city, I will grant that.  Don’t get caught up in my firsts–I was no luminary, then or now.  Just an extracurricular sort of busy kid because I practiced more than anyone else, and small towns allow that.  Big fish, small pond kind of thing for me.

My mom never missed an event.  Like ever.  We lived about 30 miles from where my mom worked as a nurse, and through some series of scheduling miracles and what must have been very little sleep, that woman made it to every single thing we ever did.  Somehow she managed, after working a full day at the hospital, to marshal the energy to drive all over southeastern Wisconsin chasing my brother and me, always with snacks and drinks of course, to watch her kids do what they did.  Every game. Every meet. Every concert.  She maybe didn’t arrive precisely at the first pitch or the 100-meter prelims, but she was there.  Every time. One of my most enduring memories of my mom is hearing her cheer for me while I was running.  Like her daughter, my mom isn’t known for her quiet, demure side.  I could be anywhere on any track in the Southern Lakes Conference, and I’d hear her scream, “Come on, Wendy” with a tone and at a volume I’ll never get out of my head.  As I cheer on my son now at his baseball games, it’s my mother’s voice coming through, not mine that I hear. “Throwin’ strikes, kid” or “Come on, kid, you’re due” transport me instantly to my middle school summers.  Who said that??  Oh, that was me. If I didn’t know better, I’d turn to look for her in the stands.

I never asked her to come, she just did.  Maybe I did ask, I don’t recall, but I didn’t have to. She knew that it mattered, and even if I just expected it, being the egocentric, jerky middle and high school kid I’m sure to have been, I’d have been wrecked if she didn’t.  I didn’t consider what she gave up to be there. She was a fixture.

I love watching my kid play ball. I enjoy them both performing at piano recitals, so I understand that she’d want to attend. Until now I couldn’t imagine how difficult it had to have been though to accomplish it though.  It’s hard when your time is not your own. It’s entirely and all-consumingly worth it, but it’s hard.  I couldn’t appreciate it until I walked in those same baseball cleats.

Three decades after my glory days, *cough, cough* I still hear her in the stands.  I hope that my boys, a few decades hence, understand the importance of being there. I wonder if my own mom worried she was screwing us up like I worry like that for my boys?  I wonder if she knows how much she got right?  Happy Mother’s Day, Mom.

Maybe down the road, one of the boys will be showering one morning himself and think, “Remember how Mom used to sit on the third base line with her winter parka on, nestled under two blankets during baseball season?  I can still hear her: ‘Throwin’ strikes, kid’ and ‘You and the catcher, E.'”