A slap in the face can come in the form of words, not actions.  I don’t recall ever being physically slapped in the face though, so any such slap has been a figurative one.  The Mother’s Day slap stung harshly.

The sky shone blue on Mother’s Day, a sapphire so perfect and rich it looked like it had to be a painted stage backdrop.  My husband and the boys decided we would take an early morning trek to our funky, local coffee shop for breakfast because 1) coffee, 2) I love going out for breakfast, and 3) Mother’s Day goodies for everyone!  The shop is one mile exactly from our home, usually a doable walk for us all.  About two-thirds of the way there however, my big kid complained of pain, and needed to take a breather.  I fall down a mountain and report back in excruciating detail about my bruises and abrasions until the last of them has faded.  I trip down the stairs with regularity, and anyone in the 53207 postal code hears me fuss.  My big kid though?  He doesn’t complain.  It’s just not in his DNA.  So for him to complain, I knew he was struggling.

We made it to the coffee shop life and limbs intact after all, but my big kid was definitely not himself.  You run through the maternal 5-point illness/injury probe: with one pointer finger, point to where it hurts; is it stabby pain or throbby pain?; did it just start hurting like right now, or have you been pushing through for awhile?;  do you have to poop?; can you move or do I need to run home and return with the car?  OK, it’s not technically a protocol, but man, I was hoping it was just an “I have to poop” thing.  If you have sons, you know exactly what I mean here.  “I have to poop” is I’m sure at the root of many mommy panic attacks and midnight calls to the nurse practitioner triage line.

Days later I remain fuzzy about the symptomatology and unsure of its etiology.  I do believe it was MD-related, which he denied.  He fatigues easily, which leads to a weird MD cycle: When your muscles fail, you get tired easily so you don’t develop the endurance to walk long distances.  Because you cannot walk long distances, you don’t develop good cardiovascular health, which affects endurance.  Because your cardio and lung capacity is reduced, you don’t engage in extended physical activity, and so on, and so on, and so on.  We stopped three times on the way home, which was A-OK by me, and it was at the third stop where all (well, some) was revealed.

Sir Trips-A-Lot accidentally took out a classmate’s chair Friday afternoon.  Proprioception not being one of his special gifts, he accidentally kicked the leg of the chair next to his, and his buddy went down.  The substitute teacher on duty was certain it was done with intent and malice aforethought, so told my kid he would be telling his regular teacher.  Big kid made it right with his friend Friday before the end of the day–it WAS an accident of course–but he feared the consequences he thought were to come.

“How do you want to handle this?” I inquired.  “Do you want to see what Ms. S has to say to you Monday or would you like me to email her before tomorrow to explain your version of the story?”

I was impressed that he wanted to handle it on his own for starters.  I told him that he if thought he was being treated unfairly, then I would contact his teacher if he believed it necessary.  I also told him that his regular teachers understand he has MD, and that sometimes his body does weird things.  I say this not as a free pass for him, but as a statement of fact.  If he took the kid out intentionally, we’d be having a very different conversation.

“Some of my classmates say I’m weird,” he ventured.

“You ARE weird,” I replied without missing a beat.  The look on his face???

“We’re all weird, it’s cool.  Some of your friends are weird or do weird things, right?”

Both my husband and I talked with him in the moment in generalities about weirdness and uniqueness, but I was the only one of us three whose eyes were teary.  See, the outliers know they’re different before anyone has to tell them so.  I know I’ve used those very words before, but they remain true.  It’s one thing as a mother to know these things, but quite another for your child to share them voluntarily.  He never complains, as I said, so I knew it mattered.  This parenting gig is not for the weak, people.  It was Mother’s Day, but I no longer felt super celebrate-y.  I felt lovey and squishy and nostalgic for their lovey, squishier toddler hands and bellies, and a bit sad that adolescence is doing what adolescence does.  Adolescence with MD, I can only imagine, complicates things that much more.

Later Sunday afternoon, he came out to the patio where I sat, bundled in my winter coat and blanket, reading a novel.  Yay for Mother’s Day leisure reading for fun under a warm(ish) spring sun!  He came out to tell me that he thought I was weird too.

“Well,  your BNL obsession for one thing.”

This was neither the time nor place to discuss the semantic distinction between obsession and concentrated hobby, so I let it go.  Instead I replied with something like, “Yeah, most moms don’t chase their favorite band across the Midwest.”

“AND Canada, you actually went to Canada.  That’s weird.”

“Yes it is, son. Tell me now one thing about me that you love.”

“You take care of us.  You do all the responsibilities around the house, and you say you love us like every day.”

I’ll take being viewed as weird in exchange for an unprompted “I love you” any day.  I guess my Mother’s Day gift was the gift of gab from that one.  He’s typically short on effusive expression, sticking with the seventh grade one-to-two word answer grunt script. 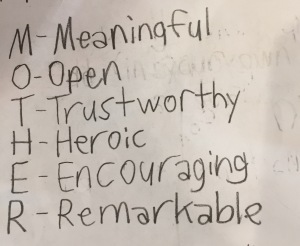 He wrote me a note, which included an acrostic poem using Mother, very much prompted, this time by one of his teachers.  Trustworthy and Heroic he wrote.  I’ll take it.