I’ve reached the pinnacle of my career as a professional development-providing speech-language pathologist.  Before Christmas break, my co-worker Christine came up with this genius scheme of offering a PD session via game show format.  I wasn’t there for the initial conversation, but apparently none of my other colleagues took her seriously enough to think she actually meant it.  As soon as she made mention of it within distance of my eavesdropping ears, I WAS IN!

I was IMMEDIATELY transported back to the living room of my parents’ house and the couch where I spent my middle and high school years.  Immediately.  Back in the day, television game shows were, forgive the pun, the only game in town.  You had three networks on television—yes, three, well four if you count PBS—and your television set was a monolith of dark, carved woodwork.  Most daytime television air carried trashy soap operas with a few local talk shows and one weird-ass Hatha Yoga show tossed in.  I didn’t get into the soaps until high school, so that meant I spent a lot of my formative youth zoned in front of the boob tube watching game shows.  I’m not saying I’m especially proud of having so little gumption that forty years later, I can still hear the Shaft-infused 70s guitar theme from Match Game. So what If I almost never wanted to drag my butt off the couch to actively participate in life then? I turned out OK. Mostly.

When I was a kid, contestants on The Price is Right had to guess how much a new car cost, and if they could, they won the car—it was the BIGGEST prize on TV.  When I was a kid, you could buy a new car for under $4000 and Bob Barker was the TPIR host, not Drew Carey.  When I was a kid, the first round of Jeopardy! had a $100 dollar max dollar value; Richard Dawson originated as the host the Family Feud, now emceed by Steve Harvey, and Kathie Lee Crosby (now Gifford) do-do-doodled her way through elevator music pop hits on Name That Tune, before Beat Shazam could be the slightest glint in someone’s wildest imagination.   TV game shows were super cheeseball high hilarity, contested by California housewives dying to meet the B-list celebrities who guest starred on these shows.  There was no reality TV.  Game shows were early reality, unscripted TV.  It was all we had. Ah, youth.

Anyway, me being me, I practically begged Christine to be her game show host.  And she let me. (squeeeeeee!) Though it was her baby, she allowed me to relive my youth in the role of game show host for MacGyver! The Speech and Language Game Show. 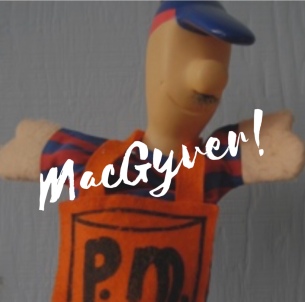 This Bizarro World puppet was part of a 1970s-era speech-language therapy kit, so in keeping with the period, I created our MacGyver! brand, our logo.  I about tinkled with delight, so pleased was I with my “graphic arts” effort. But why MacGyver?

Honestly, it came out of the very sad state of affairs of our budget and finances these days.  At the beginning of the school year, one of our SLPs had been assigned temporarily to a site where she had basically nothing more than a box of ancient picture cards, a piece of string, and a ball or something like that for therapy materials, yet she had managed to pull together meaningful therapy sessions for each of the students she served that day.  She’d managed to MacGyver it through.

Another television gem from my youth was the original television version of MacGyver.  Week after week, there’s MacGyver fighting crime and evil deeds, always at the precipice of certain death, yet finding a way to use whatever little was at his disposal to free himself and his compatriots from danger.  Stuck in a burning building?   He’d take a metal filing cabinet, turn it into a catapult and eject himself through the window past the flames.  When his car crashed and flew off the bridge into the Hudson River, he’d take a tube from the engine block along with a plastic bread bag or something and create a self-sustaining oxygen tank until the swim flippers he cut from the car’s floor mats propelled him to the surface.  MacGyver could do anything. 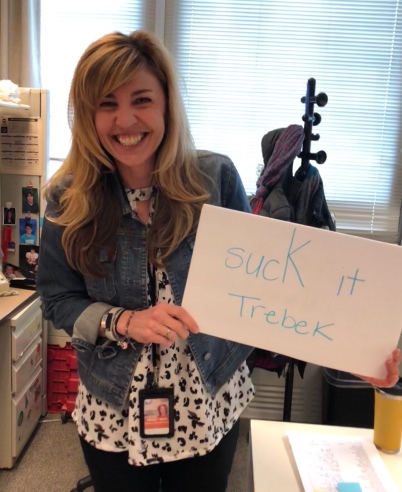 We played three rounds of MacGyver! along with our own rounds of Speech-style Family Feud, $100,000 Pyramid, and Jeopardy.  And YEAH, we had a Final Jeopardy round. With the music. It was awesome and ridiculous and perfect, and I loved every single second. I even got to be all smarmy Alex Trebek-y when someone forgot to phrase her response in the form of a question. It was joyous.  People played along and people learned stuff, so hey, it was victory all-around.

Next time we meet, I’m gonna tell you all ’bout my little talk at the MDA office tomorrow. I was asked to provide a parent perspective. I always say “know your audience” when you’re speaking to groups, and I’m breaking, I’m shattering my own rule. The only thing I know is that my kid is cool with it. It’s not like I asked his permission precisely, but I did ask him if anything was off-limits. He knows I’m talking about him, about us in some capacity, and he didn’t crumble in horrified preparatory embarrassment. How I do love that boy.